You may freely link to this Web site and its PERSONAL LINKS*, for NON-COMMERCIAL, PERSONAL or RESEARCH USE ONLY. Copyright restrictions apply to the use, transmission and reproduction of images and content on this page and its links. Any other use, without prior written permission of the copyright owners is prohibited. 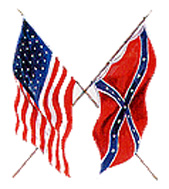 Organized in Tennessee at large September 16, 1864. Attached to Defenses of Louisville & Nashville Railroad, Dept. of the Cumberland, to March, 1865. Dept. of the Tennessee to January, 1866.

SERVICE.-Duty at Nashville, Tenn., till October, 1864; then guard Louisville & Nashville Railroad, and duty in Tennessee and Alabama till muster out. Affairs at Scottsboro and Larkinsville, Ala., January 8, 1865 and Skirmishes at Boyd's Station and Stevenson's Gap, Ala.. Mustered out January 21, 1866.

Skirmishes at Boyd's Station and Stevenson's Gap, Ala.

Major: I have the honor to report to you another attack by the enemy, made upon the garrison of colored troops under Lieutenant Becker at Stevenson's Gap. The rebel colonel Mead, with about 300 Confederate cavalry, deeps himself in the neighborhood of Boyd's Station and Stevenson's Cap and made several attacks upon the garrison stationed at that place. They attacked the working parties on Wednesday, March 15, and drove them in the stockade, and since that time, they keep themselves so close around the camp that they are unable to go on with their work in erecting a good stockade at that place. On Thursday night March 16, they commenced firing on the pickets and soon were entirely around the stockade; after two hours brisk skirmishing they left; came back again on Saturday afternoon, March 18. They attacked them again and succeeded in capturing nine of the garrison belonging to the One hundred and first U.S. Colored Infantry. I was there three times this week and every time could see the rebels on the mountain, looking down in the camp where they could observe everything that was going on. They do not try to prevent the trains from running and do not even fire into the trains passing, while they are stationed not over 1,000 yards from the railroad. Lieutenant-Colonel Wade, now in charge of the railroad, sent some re-enforcements from Larkinsville last night, which are apt to stop them from capturing any more of the garrison.