You may freely link to this Web site and its PERSONAL LINKS*, for NON-COMMERCIAL, PERSONAL or RESEARCH USE ONLY. Copyright restrictions apply to the use, transmission or reproduction of images and content on this page and its links. Any other use, without prior written permission of the copyright owners is prohibited. Genealogists/Researchers: Limited data on personal histories, location of relatives, 1924 addresses and burial information can be found in the Lincoln University, Inman E. Page Library Archives, Jefferson City, Mo. 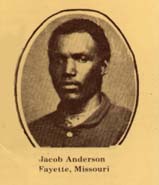 When the march for freedom began, escaped slave grandfather Sgt. Jacob Anderson alias Anderson Davis and ex-slave Great-grandfather Henry Parker, * along with 186,000 former slaves and black freedmen, responded by joining the Union Army.  Thirty-seven thousand of these men of courage made the ultimate sacrifice by giving their lives for their cause.  Those that survived the horrors of the Civil War had had much to dream about, but little ability and resources to make their dreams come true.  It was recognized then, as it is today, that education is a key to sound moral values, personal growth and economic progress.  So it was that the men of the 62nd and 65th Regiments U. S. Colored Infantry accepted these truths and implemented their plan to make at least one of their dreams come true, the co-founding of Lincoln Institute.

Grandfather Anderson escaped from the last of three slave masters.  On November 28, 1863 he enlisted in the Union Army.  Upon his discharge, he was a Sergeant and had been a member of the Honor Guard.  As one of the first to join the service in his area, Anderson was assigned to the 1st Missouri Regiment of Colored Infantry at Benton Barracks, Missouri.  On December 18, 1863 the 62nd Missouri Regiment of Colored Infantry was organized at the same location.  Later, the two units were joined to form the 62nd and the 65th United States Colored Infantry.  The men of these regiments were uneducated ex-slaves, with the exception of Franklin Lewis, a freeman.  Laws at the time forbade slaves from being educated.  In 1847, the Missouri State Legislature passed one of these laws, which made it a crime for a person to teach any Negro how to read and write.

Many of the soldiers in the 62nd and 65th died not only in battle, but from horrific conditions at the Benton Barracks.  In October 1864, less than a year after the first recruits entered Benton Barracks, a medical board convened.  Its findings showed that more than a third of those enlisted had died from various undiagnosed diseases.  Others expired due to poor sanitary conditions, lack of proper food and the means to prepare it.  One hundred soldiers, thinly clad, with no shoes and hats died during their first two months of duty at Benton Barracks, beginning December 1863.  Two hundred other soldiers were recommended for immediate medical discharge.  Black regiments were most often bivouacked near swampy or poorly drained areas of the camps.  The condition and treatment of these troops was a direct result of racism and discrimination which was prevalent throughout the army. General Daniel Ullmann was assigned to correct these conditions, which did inprove things to a more humane level.

Even after black soldiers had proven themselves in battle, officers physically abused them, while others routinely assigned them to fatigue duty, performing the most undesirable duties imaginable.

Though the army intended for the black soldier to gain some amount of educational training under the direction of the Company chaplains, Commanders weren't prone to build school houses when men were apt to be moved unexpectedly for battle.  Not until the latter part of the war did regiments significantly begin to build school houses, which were segregated when feasible.

The men of the 62nd and the 65th were committed to their educational goals, but some apparently were not always on task and doing their homework.  Some commanders, to say the least, were somewhat fanatical about correcting this situation.  As it is sometimes said, "There's the right way of doing things and there's the army's way of doing things".

Education and Ethics: The Military Way

Order By the Commander of a Missouri Black Regiment
Morganzia, La. July 3rd 1864.

All non-Commissioned officers of this command who shall fail to learn to read by or before the 1st day of January 1865 will be reduced to the ranks and their places filled by persons who can read. In the position of Sergeants preference will be given to men who can both read & write and are otherwise good soldiers. All soldiers of this command who have by any means learned to read or write, will aid and assist to the extent of their ability their fellow soldiers to learn these invaluable arts, without which no man is properly fitted to perform the duties of a free citizen.

Hereafter when any soldier of this command is found to be, or to have been, playing cards, he will be placed, standing, in some prominent position in the camp with book in hand, and required then and there to learn a considerable lesson in reading and spelling: and if unwilling to learn, he will be compelled by hunger to do so. When men are found gambling in any way, the money at stake will be seized and turned into the Regt. Hospital fund. No freed slave who cannot read well has a right to waste the time and opportunity here given him to fit himself for the position of a free citizen.  This order will be read twice to this command, and copied in each order book.

The Regimental Council of Administration having appropriated Fifty Dollars for the purchase of premiums for the encouragement of the enlisted men of this Regiment to learn to write it is hereby ordered. That a gold pen be given to the Sergeant in each Company, who shall learn to write the best by the fourth day of July 1865.

They accepted these terms!  At the end of the war, the 62nd Reg. U. S. Colored. Infantry had one of the highest rates of literacy.  Grandfather, sergeant Anderson Davis, retained his stripes.

Initial efforts to establish Lincoln Institute, (later, Lincoln University) in Jefferson City, Mo., began when soldiers started contributing part of their monthly salary to its establishment.  With each donation, the ex-slaves signed their names with a cross. As their educational achievements increased, so did the frequency with which they actually wrote their names on the list as opposed to their usual X.  You can imagine their pride.  As the Civil War came nearer to its end, the size of the donations increased.  At the close of the war, pledges as much as $200 were collected.

In his Farewell To Arms Ceremony, to the 62nd United States Colored Infantry on January, 4, 1866, Ringwald Texas, Colonel Theodore H. Barrett, stated, with the utmost of pride that, "of four hundred and thirty one men, ninety-nine have learned to read and write under-standingly; two hundred and eighty-four can read; three hundred and thirty-seven can spell in words of two syllables and are learning to read, not more than ten men have failed to learn the alphabet."
Official Records, ser. 3, vol. 4, pp. 227-28

Each year, Lincoln University holds its Founder's Day Celebration, which commemorates the soldiers of the 62nd and 65th Regiments U. S. Colored Infantry, for their patriotism, vision and their commitment to the betterment of the human spirit.

* Henry Parker was in the 101st Regiment. U.S. Colored Infantry and was a Buffalo Soldier
in the Indian Wars from 1867-1877. See BUFFALO SOLDIERS & INDIAN WARS.

Additional information on the Co-founding of Lincoln Univeristy can be found at Preservation Issues,Volume 4, Number 1.

I have noted the letters & names not legible, within ( ).
A ? means, I'm not sure if he was in the last Company noted.